Sam Guinn Field was a ballpark in Hot Springs, AR used by Negro baseball teams for exhibition games and spring training during the 1930s and 1940s. The park was located at 497 Crescent Avenue in Hot Springs. 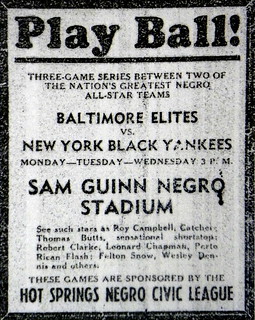 Ad from the Hot Springs Sentinel-Record.
Sam Guinn Stadium was built in 1935 and named after Sam Guinn, a student at Langston High School in Hot Springs who died on November 24th, 1933 as a result of a fractured spine injury sustained during football practice.1 .

Little is known about the structural features of the ballpark. The field was mostly used for football games and practice in later part of the 20th century. In the mid 1990s, Greater St. Paul Baptist Church was built at the present day site of Sam Quinn Field. A marker now stands as part of the Hot Springs Baseball Trail to note the importance of the site.